It’s a good idea to keep all that excess weight off your roof. Removing snow from the roof is a great way to minimize the risk of leaking and cave-ins. One square-foot of snow that’s one-inch in depth weighs roughly a pound. If your roof has 12 inches of snow on it, without roof snow removal, that could easily amount to thousands of pounds of stress on your roof.

The main reason you should keep your roof as snow-free as possible is that it’s crucial for preventing ice dams from forming on your roof. Ice dams can’t form without snow. If you’re able to prevent ice dams, you’re far more likely to prevent your roof from leaking and damaging the inside of your home.

How Do I Know I Should Remove Snow?

When deciding the right time to get roof snow removal, it’s also important to consider how heavy the snow is. Wet and heavy snow can weigh 6 to 8 times as much as light dry snow. One cubic foot of snow can range in weight from as little as 0.25 pound to as much as 1.5 pounds. If you step outside and pick up the snow and it seems heavy and moist, there’s an indicator you should get your roof cleared sooner rather than later. 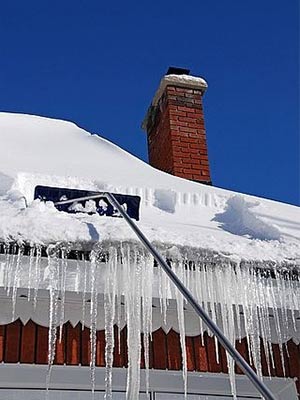